By Stephen Davies For The Mail On Sunday

Match of the Day host Gary Lineker was last night accused of mocking football fans angered by the BBC‘s decision to ditch the Saturday night football results on Radio 5 Live.

And as if to rub critics’ noses in the dirt, Match of the Day kicked off last night with last week’s Premier League results.

A grinning Lineker smirked: ‘Just in case you couldn’t find the scores anywhere else last week.’ 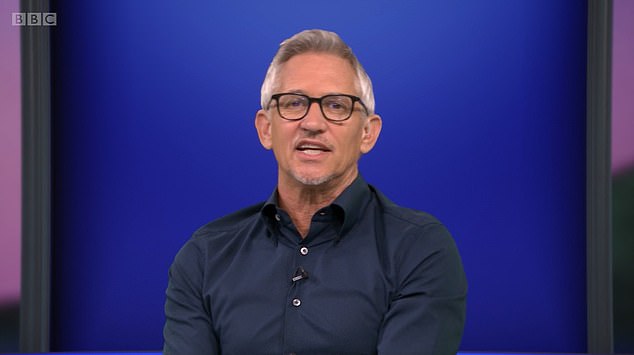 One fan tweeted: ‘Not impressed with their snide p***-taking re results.’

Another accused Lineker of ‘complete arrogance’.

The BBC issued a response to fans calling for them to reinstate the classified football results on its flagship Sports Report radio programme last week.

On Sunday night, Sportsmail revealed that the broadcaster had unceremoniously ditched the long-standing, Saturday 5pm British institution, loved by generations.

Following backlash from company legends such as Des Lynam, John Motson, Mark Lawrenson and more, the BBC have released a statement to suggest ‘there are good reasons for the change’. 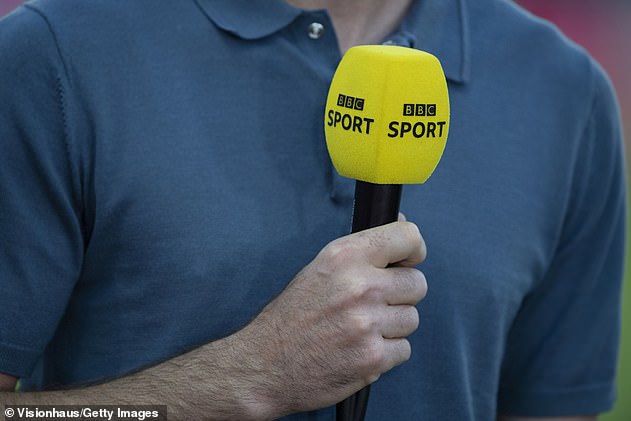 The statement read: ‘We appreciate the strength of feeling towards the classified football results within Sports Report. It’s always difficult when a programme with a special history changes, but there are good reasons for the change.

‘With the addition of the 5.30pm live Premier League match to our coverage, Sports Report has been condensed into a shorter programme – cut from 1 hour to 25 minutes. The classifieds were taking around 5-7 minutes to read, which would have taken up around a third of the programme – constraining the range of sport we could cover.

‘We’d like to assure our listeners that results from across the football leagues will still be shared during the programme and through the afternoon.

Results are also available in full on the BBC Sport website and during Final Score on BBC One. Having a live match at 5.30 is a great addition to the 5 Live schedule.’ 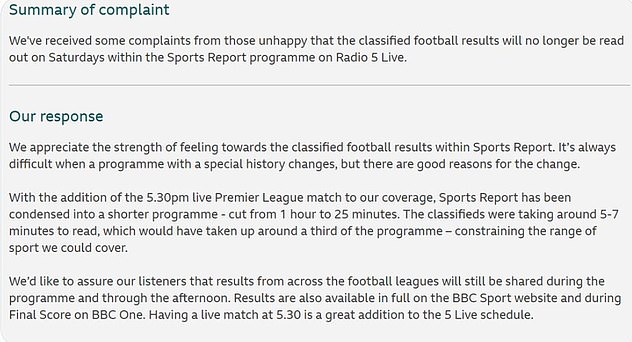 BBC insiders disclosed that there was no consultation with bemused staff, who have privately questioned the move.

In a statement to this newspaper, the broadcaster claimed the decision was made because Sports Report had been condensed following the addition of the 5.30pm Premier League match.

They added a comprehensive goal service was provided ‘on air, on the BBC Sport website and Final Score on BBC One’.

Motson, 77, who spent 50 years with the BBC before retiring in 2018, responded: ‘I’m very disappointed. I’ve been a fan of Sports Report for 60 years and I will miss the classified results very deeply.’

Lawrenson, 65, a former Match of the Day regular, added: ‘I worked for the BBC for 25 years and I love it. I also understand it, or at least I thought I did. Certain things should be sacrosanct and this is one of them.