A woman says she was forced to sleep rough in Amsterdam for two nights last weekend after her travel agent allegedly cancelled a hotel booking without telling her.

Zea Hudson, 26, turned up at her hotel in the city but was turned away after hotel clerks said the travel agent had cancelled their booking a week earlier.

Ms Hudson and her boyfriend, 42, booked their flights and accommodation through Loveholidays in February for £1,600.

She said she couldn’t find another cheap booking so ended up cowering under a thin jumper under an underpass. 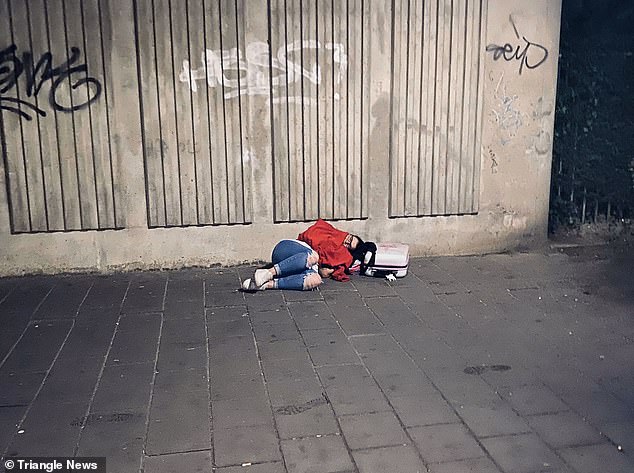 Zea Hudson, 26, said she was forced to sleep rough for two nights in Amsterdam after hotel clerks told them Loveholidays had cancelled their booking a week earlier

Ms Hudson, who spoke about her experience on TikTok where she has 16,000 followers, said she slept rough until they found somewhere else to stay and barely slept during the 48 hours.

The couple flew with EasyJet from Gatwick on July 24 and took the tram into the city before walking to the Corendon City Hotel Amsterdam, where they were due to stay.

The only rooms left were going for the price of £800 per person for the four days and the couple had just £500 spending money.

They carried their suitcases in the pouring rain but all other nearby hotels were either fully booked or out of their price range.

Ms Hudson, of Worthing, West Sussex, had recently been made redundant from her part-time job as a breakfast and after school club assistant and her boyfriend is on furlough. 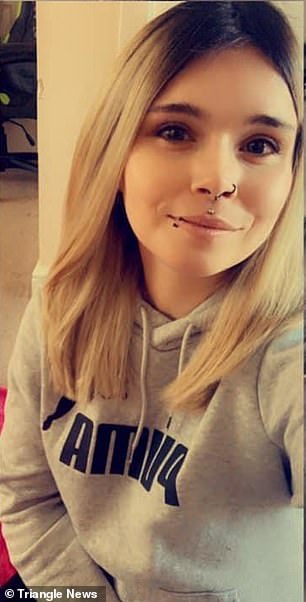 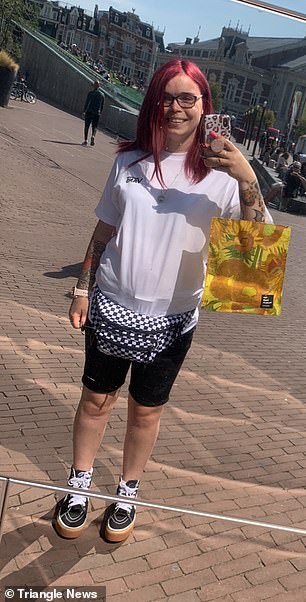 She and her boyfriend, 42, flew with EasyJet from Gatwick on July 24 and took the tram into the city before walking to the Corendon City Hotel Amsterdam, where they were due to stay

They found a good deal for both of them to stay at a Best Western hotel on Sunday and Monday last week for £400.

Ms Hudson said: ‘I felt really vulnerable. I was completely terrified. You feel like you are constantly looking over your shoulder.

‘And with coronavirus about, I said to my partner: “Are we going to catch something?”

‘We had masks on and were trying to stay clean but how can you? We were on the streets around all sorts of germs.’

She added: ‘You can’t sleep rough in the city centre so we found this tunnel – I think it was under a metro line – and went under there because from when we arrived it was absolutely soaking.

‘It was so scary. It was getting really dark and I was getting anxious because you don’t know when you’re in a different country what type of people are about.

‘Amsterdam has a Red Light District so you don’t know what type of men are about.

‘I was absolutely freezing and wet and didn’t get much sleep at all – it was a really stressful situation.

‘I’m really glad I had my partner with me because I wouldn’t have been able to do it on my own.’

Ms Hudson suffers from endometriosis, asthma, arthritis and hip dysplasia, all of which made the experience of sleeping rough in the freezing rain especially uncomfortable.

She said she caught a cold while sleeping on the concrete floor, using her suitcase for a pillow, and has since been having acute asthma attacks. 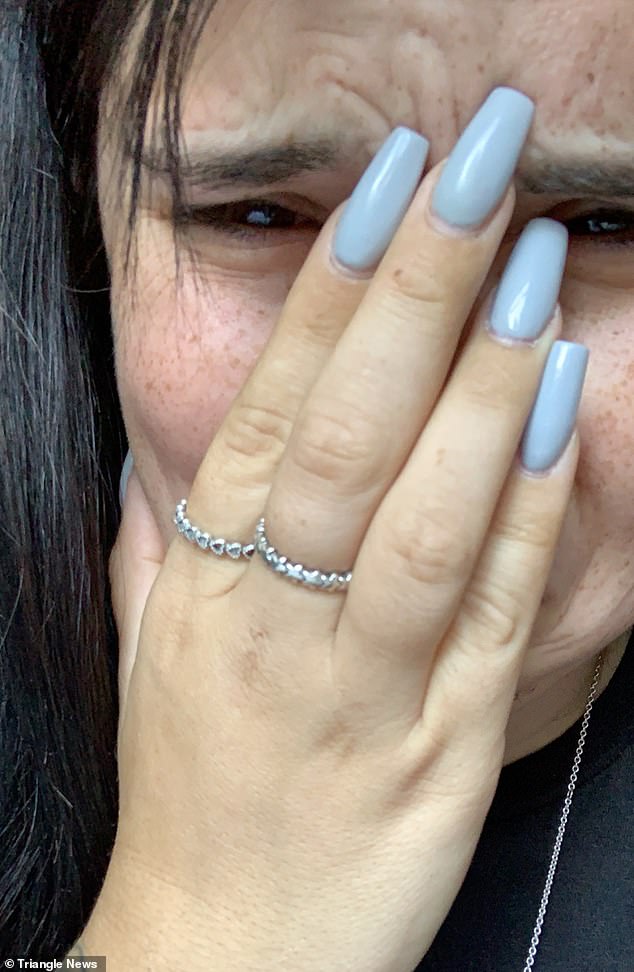 Ms Hudson said she suffers from endometriosis, asthma, arthritis and hip dysplasia which made the experience of sleeping rough in the rain especially uncomfortable

Ms Hudson added: ‘A lot of people kept walking through the underpass and you don’t expect that when it is really late, it makes you feel really uncomfortable.

‘You would hear weird animal noises in the night and that was frightening.’

She was exhausted and coming down with a cold by the time they checked in to the Best Western on Sunday.

She plans to get tested for Covid-19 if her symptoms persist.

She said she’s sent them four messages, phoned them 30 times and contacted them through their online Facebook chat.

She added: ‘I’m really worried it will happen to other people.

‘I feel really angry and also disappointed because when you book a holiday through someone you are putting your trust in them.

‘And the fact they can’t even get back to us is disgusting.’ 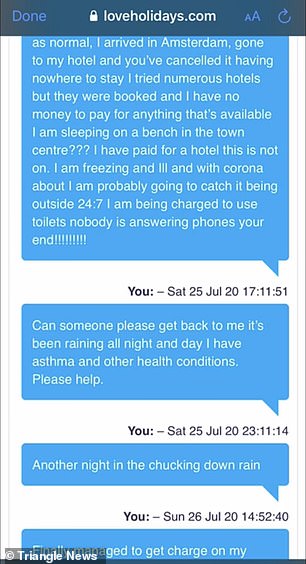 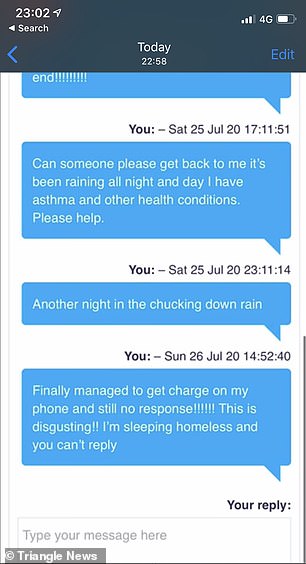 Ms Hudson said she has sent Loveholidays four messages, phoned them 30 times and contacted them through their online Facebook chat

The company said it has since been in contact with Zea to apologise and are providing her with a refund.

Loveholidays said: ‘We are very sorry to hear about the experience of Zea. On 13 July, Loveholidays was incorrectly informed through official flight data that the flight Zea had been due to take had been cancelled.

‘We contacted Zea immediately to inform her of this and provided her with options regarding her cancelled booking.

‘These would have been visible on the Manage My Booking portal on our website, which as an online travel agency, is how our customers book and manage their holidays with us.

‘We were unaware that Zea travelled as we were operating on the basis that the holiday had been cancelled, as official flight data had confirmed the cancellation of the flight, which had been communicated to Zea.

‘We are now aware that Zea attempted to contact us but was not able to do so, as an incorrect number was being used.

‘Our customer service team has since been in contact with Zea to apologise and we have been pleased to provide her with a refund.’

Horror as another baby sitter goes on bloody rampage, stabbing to death girl, 5, boy, 8, and their two dogs

How a ‘Lego’ implant that is put together like hollow ‘bricks’ could...

Girl, 15, is on ventilator after two pit bulls ripped off her...

‘We started chemo on the same day’: Nolan sisters Linda and Anne...