AVENTURA, FLA. – GOP Senate nominee Blake Masters told Fox News Digital on Sunday that Arizona voters are wondering why national Republicans are not investing more money into his race, even as polls show the contest narrowing.

Masters said during an interview at the National Conservatism Conference that while confident of victory in November, more “air cover” was needed in the form of outside ads and spending.

“It’s not my place to ask, but I that’s what I hear from the Arizona grassroots [is], ‘Like, where’s D.C.? Why aren’t they investing, this race is very close,’” said Masters. “D.C. might be a few weeks behind, but I’m doing my job as a candidate.”

Masters said the race had tightened up, with some polls showing him and Democratic Sen. Mark Kelly running neck-and-neck in the Grand Canyon State.

BLAKE MASTERS: DEMS DODGE TALKING ABOUT THEIR FAILURES, ‘GIN UP OUTRAGE’ ON ABORTION

“I think everyone’s going to realize Arizona is both important and winnable,” said Masters.
(Joseph A. Wulfsohn/Fox News Digital)

“I think everyone’s going to realize Arizona is both important and winnable,” he said.

The Senate Leadership Fund (SLF), a Super PAC closely aligned with McConnell, announced last month it was cutting nearly $8 million in ads that it reserved in Arizona throughout Election Day. The move cut nearly in half the sum the Super PAC planned to spend on the race.

SLF said its move was no indication about Masters’s candidacy, but rather in response to the shifting midterm landscape. The Super PAC, in particular, is opting to pour money into Ohio and other states that are seen as must-wins for Republicans to take control of the majority.

“We’re leaving the door wide open in Arizona, but we want to move additional resources to other offensive opportunities that have become increasingly competitive, as well as an unexpected expense in Ohio,” said SLF president Steven Law. “We think the fundamentals of this election strongly favor Republicans, we see multiple paths to winning the majority, and we are going to invest heavily and strategically to achieve that goal.”

A source close to McConnell’s orbit noted that SLF was still planning on spending $6 million between now and election day. They noted that another McConnell group, One Nation, has already spent over $5 million on the race. Senator McConnell met with Masters recently to reiterate his support and offered to do everything he can to help him win, a source close to Sen. McConnell told Fox News Digital. 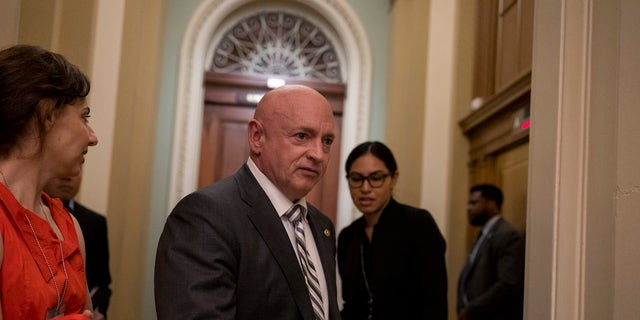 As of July, Masters had raised $4.8 million to Kelly’s more than $52 million.
(Anna Moneymaker/Getty Images)

SLF’s cut came less than a week after McConnell told an audience in his home state of Kentucky that the GOP’s chances of retaking the Senate majority were more difficult than initially hoped.

“I think there’s probably a greater likelihood the House flips than the Senate,” said McConnell. “Senate races are just different, they’re statewide. Candidate quality has a lot to do with the outcome.”

As of July, Masters had raised $4.8 million to Kelly’s more than $52 million, according to Center for Responsive Politics. The figure does not account for outside spending from Super PACs and other groups backing the candidates.

“We want as much help as we can get,” said Masters. “There’s a David and Goliath type dynamic to this funding situation right now. “

‘Strictly’ Winner Stacey Dooley Is A Soon To Be Mama

Love ‘Hold Me Closer’? Have a look at Some Other Britney Spears Hits