A group of angry Scottish nationalists confronted BBC Scotland Editor James Cook outside a Conservative hustings in Perth last night and called him ‘scum’, a ‘liar’ and a ‘traitor’.

A large crowd of protesters had gathered outside the Tory leadership hustings in Perth which took place last night shouting ‘Tory scum’ and ‘Tories out’. 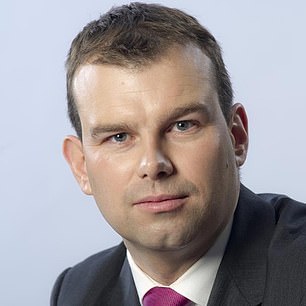 A small section of these protestors began shouting abuse at Mr Cook, jabbing their fingers at him and telling him he was a ‘scumbag’ and a traitor to Scotland.

One nationalist repeatedly asked him how long he had lived in Scotland, to which the journalist looked visibly surprised and replied he has lived there all of his life.

Mr Cook attempted to engage with the protesters and answer their questions, but they shouted over him and became increasingly abusive, social media footage shows.

‘Their job is vital to our democracy and it is important to report and scrutinise, not support any viewpoint.

‘James Cook is a journalist of the highest quality and a total pro – the behaviour he was subjected to last night was disgraceful.’

During the video, which was filmed by protesters, Mr Cook was asked how long he had been in Scotland.

‘I’ve been in Scotland my whole life,’ he told the woman, who was asking about the Claim of Right, a document which dates back to 1689.

‘I’m not going to be starting asking you how long you’ve been in Scotland, I think it’s a bit of a rude question.’

Mr Cook later retweeted a comment from his BBC colleague who praised him as a ‘class act’ who was ‘under pressure, provocation, being insulted and trying to engage’. 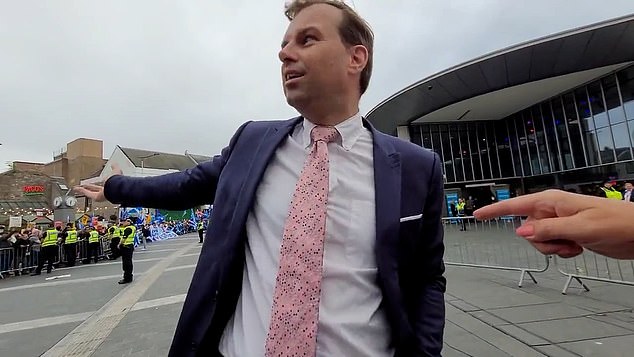 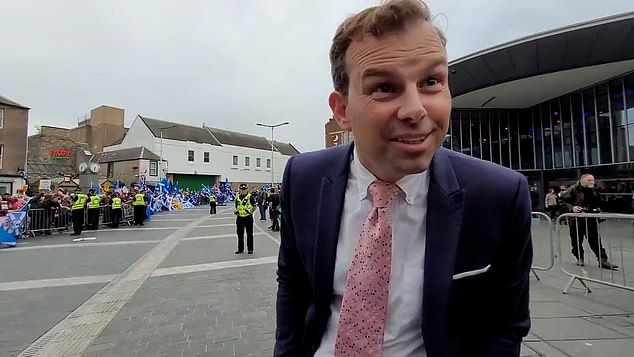 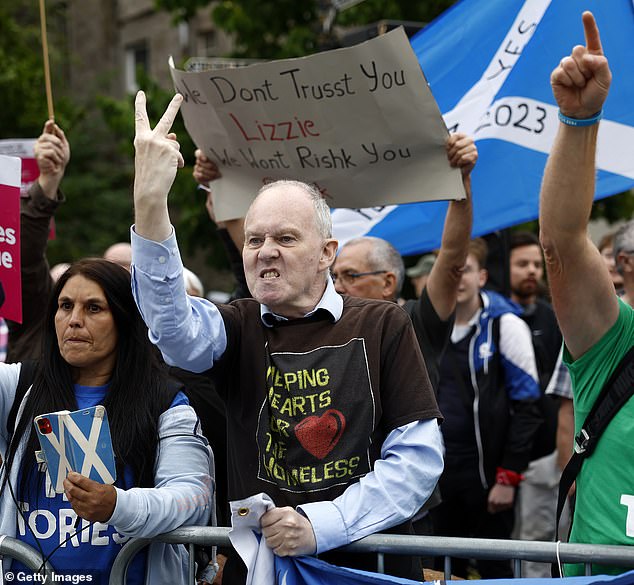 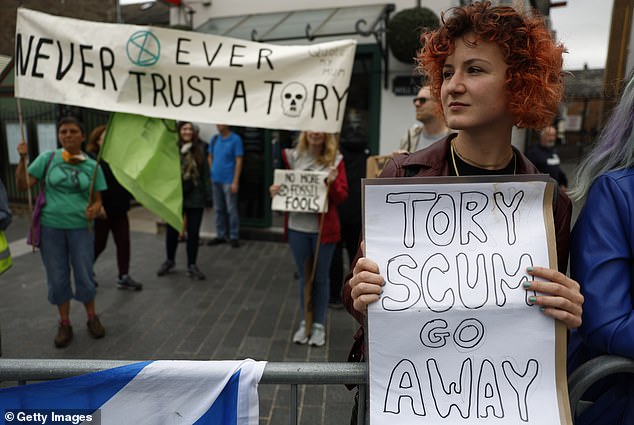 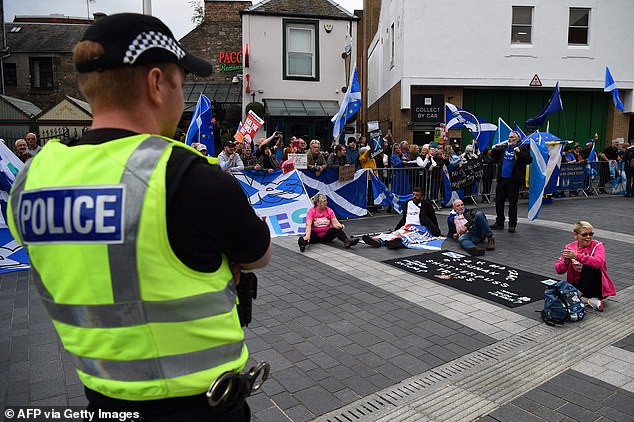 The video of the incident has been shared widely on social media and members of the public as well as politicians and fellow journalists have condemned the behaviour of the protesters.

Another viewer said the abuse was ‘a genuine embarrassment to mainstream, cool headed independence supporters.’

Conservative leadership candidates Liz Truss and Rishi Sunak travelled to Perth last night for their latest stop on the campaign trail in a bid to win Tory membership votes.

Both confirmed they would not allow a second independence referendum as Prime Minister, with Liz Truss arguing the 2014 vote had been a ‘once in a generation’ event.

People demonstrating outside the city’s Concert Hall were seen pushing through barriers and shouting at the attendees before the event started at 7pm on Tuesday.

Police officers were pictured managing the crowds, with people carrying placards saying ‘Tory scum go away’, ‘refugees welcome’ and ‘No ifs no buts no Tory cuts’.

A large banner covered one of the barriers which read ‘Scottish Not British’, with another next to it saying ‘It’s time for independence’.

In a separate incident Conservative MP for West Aberdeenshire and Kincardine Andrew Bowie claimed ‘eggs were being thrown’ and that there was ‘spitting at pensioners.’

He tweeted: ‘The good old ‘tory scum’ banner out… Good to see Nicola Sturgeon’s civic and joyous nationalism in action in Perth tonight.’

In response to his tweet, SNP MP for Glasgow East David Linden said: ‘These morons don’t speak for me or my party.

‘We condemn their behaviour utterly and without equivocation. If anyone of them is found to be an SNP member, then they should be chucked out immediately. It’s as simple as that.’

Commenting on reports of egg throwing and spitting, leader of the Scottish LibDems Alex Cole-Hamilton said: ‘This is utterly grim and not the Scotland I recognise at all.

‘Make your point, resist policy with ideas and debate and stand your ground but do it with respect. Not eggs and spit.’

Tory leadership contenders Liz Truss and Rishi Sunak both promised greater scrutiny of the Scottish Government ahead of the hustings. 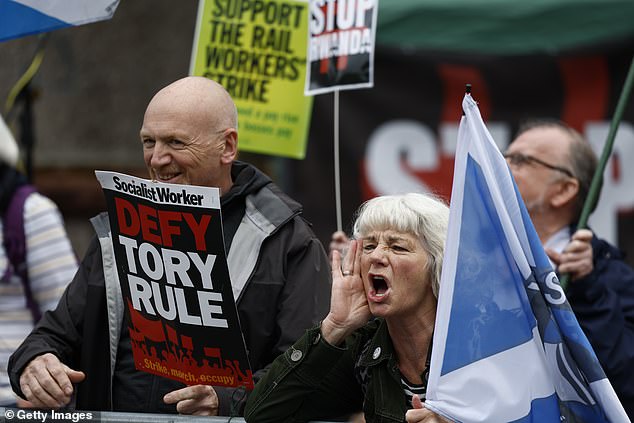 There were reports of egg throwing and spitting by protesters, although most were said to be peacefully campaigning for an end to Tory rule 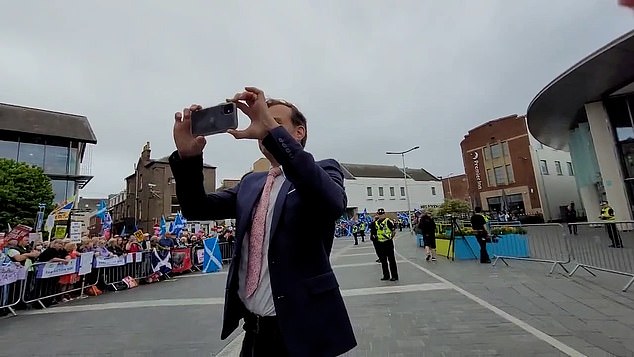 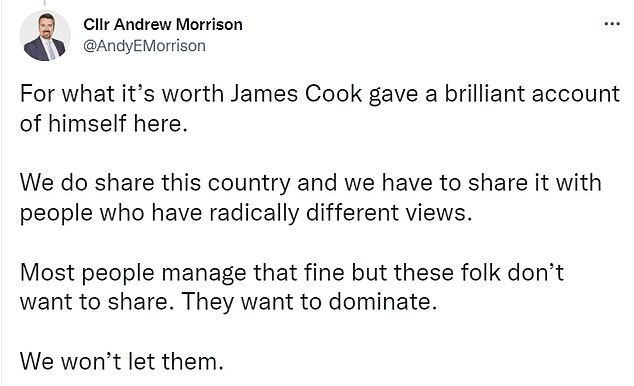 Earlier, Mr Sunak was asked if he would ignore the SNP leader, to which he replied: ‘No, I don’t want to ignore Nicola Sturgeon, I want to take her on and beat her.

‘I think we can make a very strong case for what the UK Government does to help people in Scotland and as chancellor I started that.’

His comments come after his rival Ms Truss claimed she would ignore Ms Sturgeon if she wins the Tory leadership contest, and branded the First Minister an ‘attention seeker’.

Police Scotland confirmed it was aware of a demonstration outside an event in Perth on Tuesday.

The force said there were no reports of injuries, and any reports of criminality will be investigated thoroughly.

A spokesperson for the force said: ‘An appropriate policing plan was in place to maintain public safety and minimise disruption.

‘Police Scotland is a rights-based organisation that puts our values of integrity, fairness, respect and a commitment to upholding human rights at the heart of everything we do.

‘We have a duty under the European Convention on Human Rights to protect the rights of people who wish to peacefully protest or counter protest balanced against the rights of the wider community.’

Where Is Bob Barker Now? Marriage, Kids, Net Worth