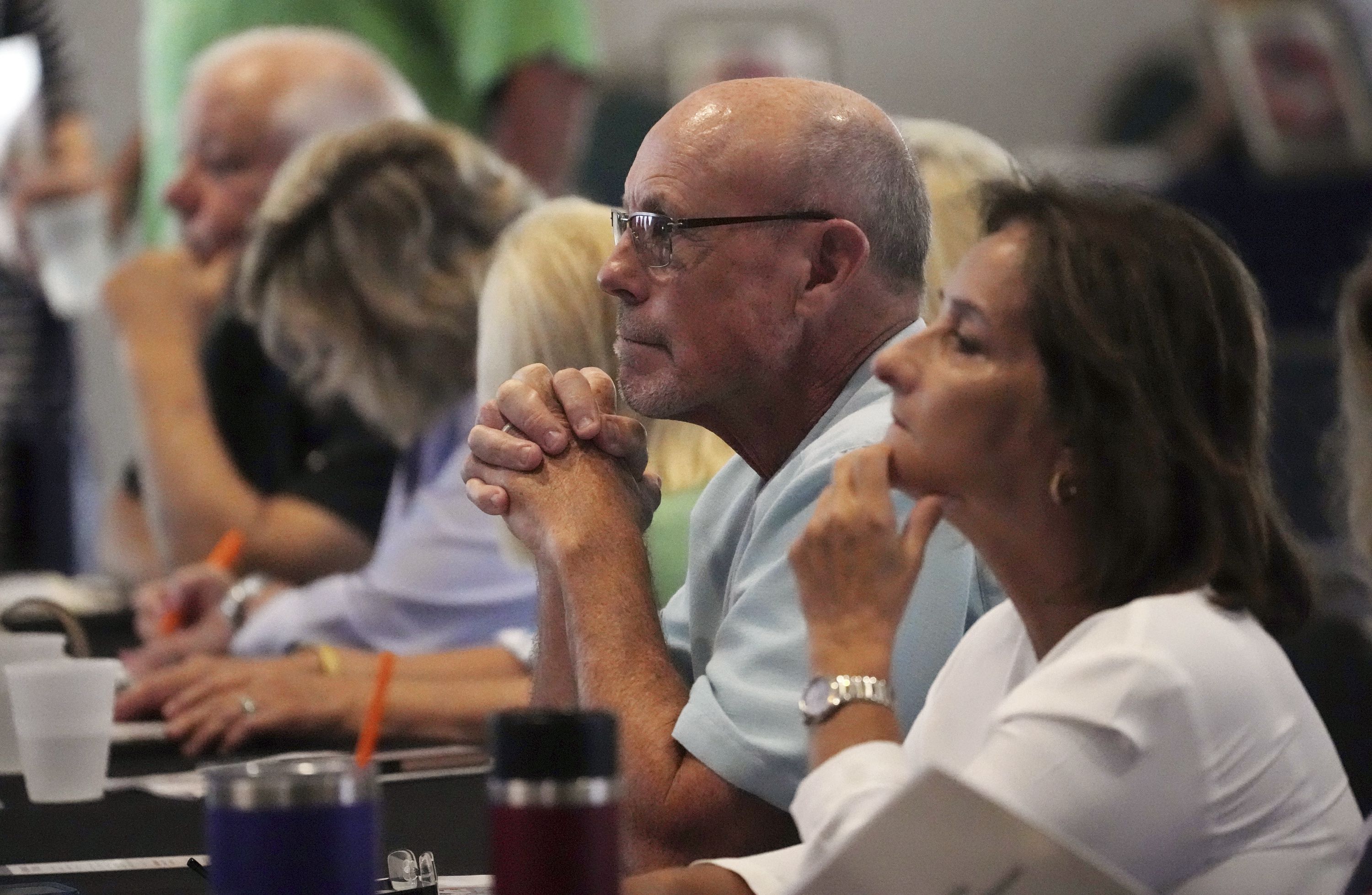 WEST PALM BEACH, Fla. – Four Republicans seeking to overhaul how elections are run by becoming their state’s chief election official said Saturday they were fighting against a corrupt system — even pointing a finger at mysterious forces within their own party.

“Our biggest enemy is our own party,” said Marchant, a businessman and former state lawmaker who was among Trump’s most ardent supporters challenging President Joe Biden’s 2020 win in Nevada. “Even though we are Republicans, we are kind of the outsiders. We have a battle, but we’re not giving up.”

All are members of the America First Secretary of State Coalition, which calls for large-scale changes to elections. While not officially tied to Trump’s America First movement, it’s part of the broader effort promoting conservative candidates who align with the former president’s views.

Eliminating voting machines, mailed ballots and early voting are among their plans. The coalition also supports hand-counting of all ballots and a single day of voting for all Americans with few exceptions. They did not say whether Election Day should be a national holiday.

Many of their ideas are based on unfounded claims that voting machines are being manipulated. Nearly two years after the 2020 election, no evidence has emerged to suggest widespread fraud or manipulation while reviews in state after state have upheld the results showing Biden won.

The four are among the nearly 1 in 3 Republican candidates running for statewide offices that play a role in overseeing, certifying or defending elections who have supported overturning the results of the 2020 presidential contest, according to an Associated Press review.

Election experts say candidates who dispute the results of a valid election in which there has been no evidence of wrongdoing pose a danger of interfering in future elections. They warn it could trigger chaos if they refuse to accept or challenge results they don’t like.

With less than nine weeks before the November election, the candidates took time off the campaign trail in their own states to appear at the event, organized by the secretary of state coalition and the Florida affiliate of The America Project. The America Project was founded by Michael Flynn, the retired lieutenant general and Trump’s former national security adviser, and Patrick Byrne, founder of Overstock.com.

It was the latest in a nationwide effort to question the results of the 2020 election and promote conspiracy theories about voting machines and the workings of election offices. The forums, held for well over a year, have helped to undermine confidence in elections among broad swaths of the Republican Party.

A few hundred people attended Saturday’s conference, which featured numerous panels claiming that elections are being manipulated in a variety of ways. One panel was comprised of former candidates — Democrats and Republicans from around the country — who sought to cast doubt on their election losses in bids to challenge elected officials in their states.

Karamo, a community college professor, gained prominence after the 2020 election for claiming she saw irregularities in the processing of handling mailed ballots while serving as an election observer in Detroit. She called the election system corrupt.

A wide-ranging review of the 2020 election in Michigan by Republicans who control the state Legislature found no systemic fraud and no issues that would have changed the results. Similar reviews in other battleground states have come to the same conclusion. Dozens of court cases brought by Trump and his allies were turned away, and even the former president’s own Justice Department found no evidence of widespread fraud.

Nevertheless, the Republican secretary of state candidates speaking Saturday spoke of a system they see as hopelessly corrupted.

Finchem said he did his job as a state lawmaker in calling a public hearing to discuss election concerns and noted how Arizona Gov. Doug Ducey, a Republican in his final term, dismissed the effort: “How do you like me now, Doug?” Finchem said.

He added: “We are in battle against a cartel.”

Finchem was at the U.S. Capitol on Jan. 6, 2021, before Trump backers attacked Congress and has pushed for Biden’s win in Arizona to be withdrawn, something the law provides no way to do.

False claims about the 2020 election have led to death threats against election officials and workers, prompting some to leave the profession and raising concerns about a loss of experienced professionals overseeing elections in November.

The repeated false claims of a stolen election also have eroded confidence in U.S. elections. An Associated Press-NORC Center for Public Affairs Research poll in 2021 found that about two-thirds of Republicans say they do not think Biden was legitimately elected.

Trujillo, a small business owner from the central New Mexico town of Corrales, said she wants the state’s officials to follow the law when it comes to elections and to increase transparency. For example, she raised concerns about the security of drop boxes used to return mailed ballots, even though there is no evidence of widespread problems with drop boxes.

She also criticized election officials for being dismissive or even condescending to voters who have doubts.

“We have questions as voters and we should get to ask them,” Trujillo said in an interview after speaking as part of the panel. “We shouldn’t feel like, ‘OK, we can’t ask that because it’s taboo and we’ll look like we’re trying to question the elections.’ Because the integrity needs to be there. It needs to be very transparent.”

‘Avatar: The Way of Water’ D23 Footage Shown Off