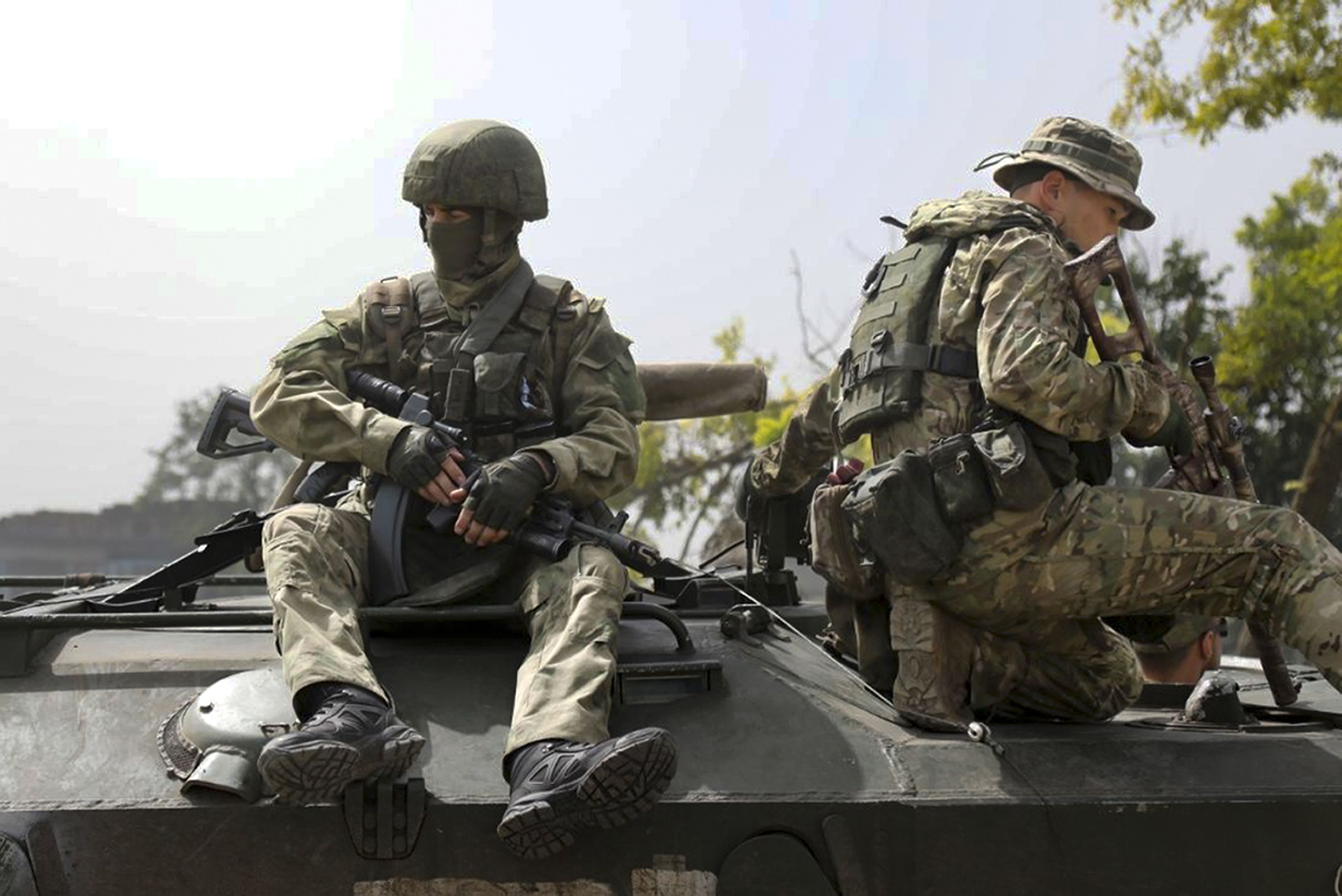 KYIV – Ukrainian forces on Sunday pushed its counteroffensive in the country’s east, exploiting quick gains they made in a week of fighting that has sharply changed the course of the conflict.

Ukraine’s quick action to reclaim Russia-occupied areas in the northeastern Kharkiv region forced Moscow to withdraw its troops to prevent them from being surrounded and leave behind significant numbers of weapons and munitions in a hasty retreat as the war marked 200 days on Sunday.

The jubilant Ukrainian President Volodymyr Zelenskyy mocked the Russians in a video address late Saturday, saying that “the Russian army in these days is demonstrating the best that it can do — showing its back.”

On Sunday, he posted a video of Ukrainian soldiers hoisting the national flag over Chkalovske, another town they reclaimed from the Russians in the counteroffensive.

Ukraine’s military chief, Gen. Valerii Zaluzhnyy, said Sunday that Ukraine had liberated about 3,000 square kilometers (about 1,160 square miles) since the beginning of September. He noted that the Ukrainian troops are now just 50 kilometers (about 30 miles) away from the border with Russia.

The Russians’ pullback marked the biggest battlefield success for Ukrainian forces since they thwarted a Russian attempt to seize the capital, Kyiv, at the start of the nearly seven-month war. Ukraine’s attack in the Kharkiv region came as a surprise for Moscow, which had relocated many of its troops from the area to the south in expectation of the main Ukrainian counteroffensive there.

In an awkward attempt to save face, the Russian Defense Ministry said Saturday the troops’ withdrawal from Izyum and other areas in the Kharkiv region was intended to strengthen Russian forces in the neighboring Donetsk region to the south.

The claim sounded similar to the justification Russia gave for pulling back its forces from the Kyiv region earlier this year when they failed to take the capital.

The group of Russian forces around Izyum has been key for Moscow’s effort to capture the Donetsk region, and their pullback will now dramatically weaken the Russian capability to press its offensive to Ukrainian strongholds of Sloviansk and Kramatorsk just south.

Igor Strelkov, who led Russia-backed separatists in the early months of the conflict in the Donbas when it erupted in 2014, mocked the Russian Defense Ministry’s explanation of the retreat, suggesting that handing over Russia’s own territory near the border to Ukraine as a “contribution to Ukrainian settlement.”

The retreat drew angry comments from Russian military bloggers and nationalist commentators, who bemoaned it as a major defeat and urged the Kremlin to respond by stepping up war efforts. Many scathingly criticized Russian authorities for continuing with fireworks and other lavish festivities in Moscow that marked a city holiday on Saturday despite the debacle in Ukraine.

Just as the Russian forces were hastily pulling back from Izyum under Ukrainian fire, Russian President Vladimir Putin attended the opening of a huge observation wheel at a Moscow park, a new transport link and a sports arena.

The action underlined the Kremlin’s effort to keep pretending that the war it calls a “special military operation” was going according to plan without affecting the situation in the country.

“The fireworks in Moscow on a tragic day of Russia’s military defeat will have extremely serious political consequences,” Markov wrote on his messaging app channel. “Authorities mustn’t celebrate when people are mourning.”

In a sign of potential rift in the Russian leadership, Ramzan Kadyrov, the Kremlin-backed leader of Chechnya, said that the retreat from the Kharkiv region resulted from the Russian military leadership’s blunders.

“They have made mistakes and I think they will draw the necessary conclusions,” Kadyrov said. “If they don’t make changes in the strategy of conducting the special military operation in the next day or two, I will be forced to contact the leadership of the Defense Ministry and the leadership of the country to explain the real situation on the ground.

Ukrainian Defense Minister Oleksii Reznikov said in televised comments Saturday that the Russians have been cut off from supply lines and predicted more gains.

“It will be like an avalanche,” he said, predicting a Russian fallback. “One line of defense will shake, and it will fall.”

Despite Ukraine’s gains, U.S. Secretary of State Antony Blinken and the head of NATO warned Friday that the war would likely drag on for months. Blinken said the conflict was entering a critical period and urged Ukraine’s Western backers to keep up their support through what could be a difficult winter.

In another major development Sunday, the Zaporizhzhia nuclear power plant, Europe’s largest, was reconnected to Ukraine’s electricity grid, allowing engineers to shut down its last operational reactor in an attempt to avoid a radiation disaster as fighting rages in the area.

For several previous days, the plant was operating in “island mode” with just one of its six-reactors working to power cooling systems and other crucial equipment.

Follow the AP’s coverage of the war at https://apnews.com/hub/russia-ukraine