Democrat Stacey Abrams dismissed comparisons between her refusing to concede the 2018 Georgia gubernatorial race and Donald Trump’s claims that he won the 2020 election on Monday evening.

She said it was ‘wrong’ to compare her with Trump because her gripes were with ‘access’ to the ballot box rather than ‘fraudulent outcomes,’ Abrams told 19th News.

Meanwhile the progressive activist’s chances of winning the seat in 2022 are looking equally dim – a new poll in the Atlanta Journal-Constitution on Tuesday shows Abrams trailing incumbent Republican Governor Brian Kemp by 8 percent.

Kemp narrowly defeated Abrams for the governor’s mansion in Atlanta in 2018, by a margin of 1.4 percent.

Abrams refused to concede the race, a stance she has reaffirmed and defended multiple times throughout the intervening years.

While acknowledging that Kemp was now governor of Georgia, she suggested he had also worked to suppress voter turnout in his role at the time as Secretary of State – a position that oversees elections statewide. She filed a lawsuit over it in 2019, arguing that the Peach State’s Republican officials ‘grossly mismanaged’ its elections.

‘The issues that I raised in 2018 were not grounded in making me the governor,’ Abrams said. ‘Not a single lawsuit filed would have reversed or changed the outcome of the election.’ 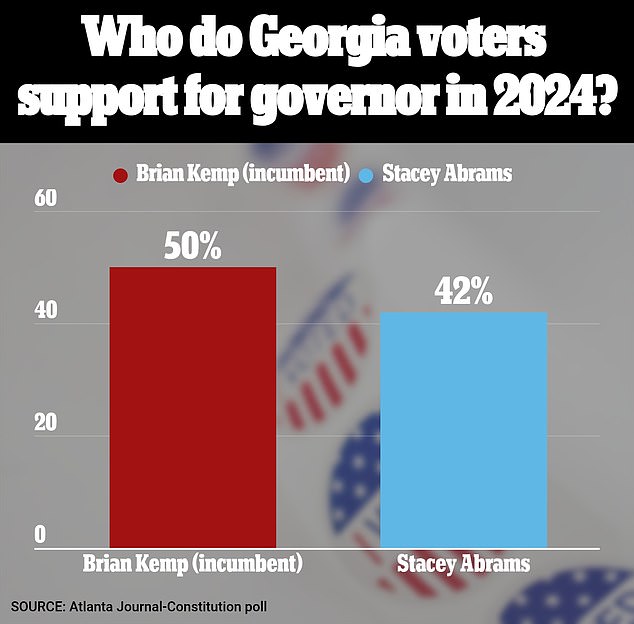 ‘My point was that the access to the election was flawed, and I refuse to concede a system that permits citizens to be denied access. That is very different than someone claiming fraudulent outcome.’

She then took a jab at Republicans who are calling her out for criticizing Trump for his baseless 2020 fraud claims while suggesting 2018 was stolen from her.

‘The challenge is that people are always going to cherry pick the language that they want to make the points that they need,’ Abrams said. ‘And I apologize that people can only listen to four seconds of a speech and not the whole 15 seconds.’

‘But what I think is absolutely critical is that we not allow ourselves to conflate access and outcome.’

Abrams was lauded by former Trump aide Alyssa Farah Griffin last week for stating on the show that she ‘didn’t win’ the race – nearly three years after it took place. Griffin told her, ‘May I just say, thank you for admitting outright you didn’t win.’

The Republican Governor’s Association told DailyMail.com that it was a ‘laughable attempt to rewrite history.’

‘In 2018, Stacey Abrams loudly proclaimed to all of Georgia “I cannot concede.” Her laughable attempts to rewrite history are easily contradicted by her own words on video,’ regional RGA press secretary Maddie Anderson said. 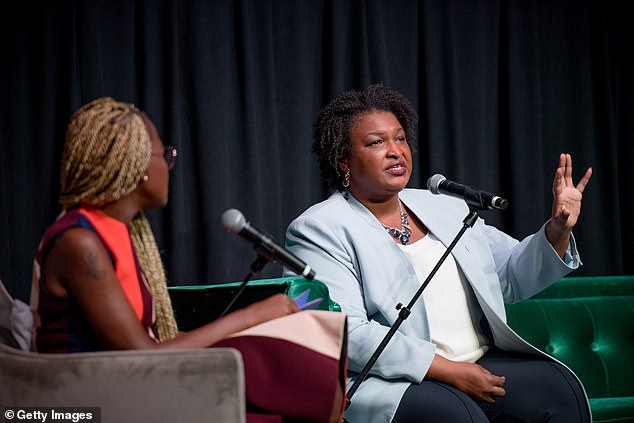 Abrams explained the difference between her and Trump’s claims in an interview, ‘My point was that the access to the election was flawed, and I refuse to concede a system that permits citizens to be denied access. That is very different than someone claiming fraudulent outcome’ 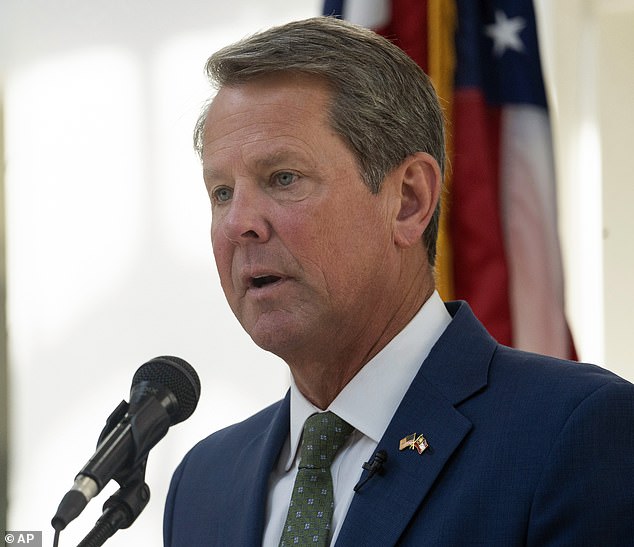 She’s in a rematch against Kemp (pictured) after losing to him in 2018 by 1.4 percent

‘My advice is to Abrams is to continue going on MSNBC and The View, two willing partners in her quest to lie to Georgia voters about her record.’

A majority of 54 percent also said they approve of Kemp’s job as governor.

In Georgia, candidates need a majority of the vote – rather than a plurality – to avoid a runoff election.

Tuesday’s Atlanta Journal-Constitution poll is a damning projection for Democrats in the state overall.

In the Senate race, where Democrat Sen. Raphael Warnock is seeking a full term after winning a January 2021 special election, he is trailing Trump-backed Republican Herschel Walker.

Walker is polling at 46 percent of support, while Warnock has 44 percent.

How Much Money the HGTV Star Makes

Liz Truss has prepare for maintaining broken United Kingdom with each other, advocates state